Of Mice and Men Quiz

2. How does Steinbeck portray society in Of mice and men?

4. The death of Candy’s dog foreshadows….

5. Why is George concerned about Lennie taking a long drink of water, in chapter one?

6. In which state is Of Mice and Men set?

9. The first person George and Lennie meet on the ranch is…

11. What does Crooks spend most of his time doing?

13. What does Slim remind Carlson to take when he leaves the bunkhouse with Candy’s dog?

14. Why do George and Lennie have to leave Weed?

16. What does George tell Lennie before he shoots him?

18. Recently married; wanted to be a movie star

20. Why does Curley’s wife feel lonely on the ranch?

21. Why does Curley hate Lennie?

22. Which of the animals is NOT killed in the story?

23. How was George different from a typical ranch worker in the story?

24. When Curley attacks Lennie, what does he initially do?

25. George says he and Lennie are different from other ranch hands because they have…?

28. The following is an example of what literary device: “In and out of the beam flies shot like rushing stars.”

30. At the BEGINNING of chapter 5, Lennie has accidentally killed

32. Who comes looking for Lennie at the end of chapter 5?

33. When Lennie is waiting for George which of the following voices does he hear

35. The story begins and ends in the same setting. What is this an example of?

36. What is the effect of hearing the men shouting at a distance (right before George shoots Lennie)?

37. Why will George feel a huge sense of loss at the end? (Aside from losing his BFF)

39. According to Curley’s wife, under what condition do the men speak to her? 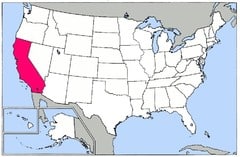 What is the story’s setting?
The story’s setting is in California in the 1930s.
Describe George
small, intelligent, short-tempered but a loving and devoted friend, complains that taking care of Lennie makes his life much harder, terse and impatient at times, but he never strays from his primary purpose of protecting Lennie.
Describe Lennie
One of the least dynamic characters of the story. He undergoes no significant changes, development, or growth throughout the story and remains exactly as the reader encounters him in the opening pages. Simply put, he loves to pet soft things, is blindly devoted to George and their vision of the farm, and possesses incredible physical strength, he is big and has a slight mental disability.
Describe Candy
Old handyman, only one useful hand, has an old dog, the swamper
Describe Curley
boss’s son, married only two weeks and is a boxer. Becomes increasingly meaner throughout story.
Describe Curley’s wife
Considered a troublemaker, temptress. She doesn’t like her life. Preys on other peoples weaknesses like Lennie, Candy, and Crooks.
Describe Crooks
lively, sharp witted, African American stable hand, has crooked back, lonely, mistreated, negative, bitter, wants to join men on their “dream” farm.
What do nearly all of the characters, including George, Lennie, Candy, Crooks, and Curley’s wife, admit, at one time or another?

At one time or another almost all of the characters admitted to having a profound sense of loneliness and isolation.

Each desires the comfort of a friend, but will settle for the attentive ear of a stranger.

The “dream” farm symbolizes a free and peaceful life.

It represents the possibility of freedom, self-reliance, and protection from the cruelties of the world.

What is the name of the town from which George and Lennie are fleeing when the story opens?
Weed, California
What excites Lennie most about his dream life with George?
Tending to the rabbits is what excites Lennie most about his dream life with George.
Why is Candy unable to imagine getting rid of his old dog?
Candy is unable to imagine getting rid of his old dog because he has had him since he was a puppy and they are each other’s family.
Why does Carlson insist on shooting Candy’s dog?
Carlson insist on shooting Candy’s dog because Carlson believes the dog is too smelly, old, and decrepit.
What is Old Susy’s place?
a cat house/saloon
Who discovers Curley’s dead wife?
Candy
Who cared for Lennie before George?
Lennie’s Aunt Clara
Of Mice and Men is set in which decade?
1930s
What does Curley’s wife offer to let Lennie touch?
Her hair
To whom does Candy look for advice before allowing Carlson to shoot his dog and this person decided the dog’s fate?
Slim
How did Crooks get his name?
He has a crooked back.
Before George meets Lennie in the woods in the final scene, what does he take?
Carlson’s luger pistol
What does George say to Lennie before shooting him?
He tells Lennie the story of their farm.
After killing Curley’s wife, which of the following pairs does Lennie imagine appears to chastise his behavior?
Aunt Clara and a giant rabbit
Whom do Lennie and George agree to let live on their farm?
Candy
Disappointed with her life, Curley’s wife wonders where she would be if she had followed her dreams and become what?
A movie star
What does “live off the fatta of the lan'” mean?
The men will have their own place and provide for themselves using their garden and animals. They won’t need to rely on others in order to live.
Describe Slim
He is the prince of the ranch, the person everyone listens to and respects. He is more of a boss to the men and his word is gold. Ageless.
Describe Carlson
Powerful, big stomached man-worker on the ranch. He doesn’t like Candy’s dog and wants the dog gone. Shoots Candy’s dog. Has the gun (luger)
What are 4 lies George tells when arriving on the ranch?
-He and Lennie are cousins
-Lennie got kicked in the head by a horse
-The job in Weed was finished
-The bus let them off 10 miles out
What does Lennie want on his beans?
Ketchup
In chapter 1, what does Lennie have in his pocket?
a dead mouse
What game do all the men play outside the bunkhouse?
horseshoes
Who is the first person George and Lennie meet on the ranch?
Candy
How many puppies did Slim’s dog have?
9
How many dogs did Slim drown?
4
What does Slim give to Lennie?
a brown and white puppy
Where did Curley and his wife meet?
at a dance
Which 4 main characters appear in chapter 4? (in order of appearance)
Crooks, Lennie, Candy, Curley’s wife
What happened to Candy’s hand?
he got it caught in a machine on the ranch
How do George, Lennie, and Candy think they can actually fulfill their dream?
Candy got $250 for being injured on the farm and if they combine all their monthly earnings, they can get the farm from the old couple who need to sell it to pay for an operation.
Where was George in chapter 4 when Lennie was in Crooks’s room?
in town
Where was George when Lennie killed the puppy and Curley’s wife?
playing horseshoes
With whom does Lennie fight and what happens to that person?
Curley starts picking on Lennie and Lennie ends up crushing his hand.
What is Curley supposed to say happened to his hand when people asked?
That he got it caught in a machine.
Where does Crooks live?
in the barn, his “own room” next to the animals
Who is the 4th person that wants to help out on the new farm when Lennie, George, and Candy secure the land?
Crooks
Who finds Lennie and the dead puppy in the barn?
Curley’s wife
What happened in Weed?
Lennie grabbed a girl’s dress, she said he hurt her, and the guys run them off the land.
Who wrote “Of Mice and Men”?
John Steinbeck
Where was Steinbeck born?
Salinas, CA
Where did he go to school/college?
Stanford University
How many wives did he have?
3
How many kids did Steinbeck have?
2
What are Steinbeck’s wives names?
Carol, Gwyndolyn, Elaine
What are Steinbeck’s kids names?
Thomas and John
Who was Steinbeck’s best friend? What does he do for a living?
Ed Ricketts, marine biologist
What is Steinbeck’s dog’s name?
Charley
Where did Steinbeck’s life end?
New York
For which novel did Steinbeck win the Pulitzer Prize?
The Grapes of Wrath
What job did Steinbeck have in WWII?
war correspondent
What is another award that Steinbeck won other than the Pulitzer Prize?
Nobel Prize
Where does the book “Of Mice and Men” start?
A few miles south of Soledad by the Salinas River