Molecular compounds are inorganic compounds that take the form of discrete molecules. Examples include such familiar substances as water (H2O)(H2O) and carbon dioxide (CO2)(CO2). These compounds are very different from ionic compounds like sodium chloride (NaCl)(NaCl). Ionic compounds are formed when metal atoms lose one or more of their electrons to nonmetal atoms. The resulting cations and anions are electrostatically attracted to each other. 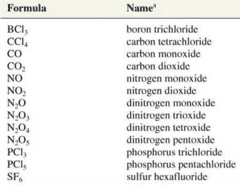 How are molecular compounds named?
~They’re named the same way as you’d name ionic compounds. You need to add a prefix to the element names indicating the number of atoms in the formula.