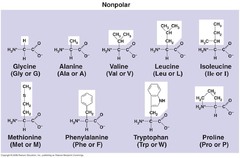 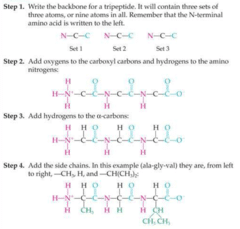 Each of the figures above represents a peptide with three amino acids linked together (a “tripeptide”). In which figure are the N-terminus, C-terminus, Amino Group, and Carboxyl Group correctly labeled?
A. This figure correctly identifies the components of a peptide (or polypeptide) chain 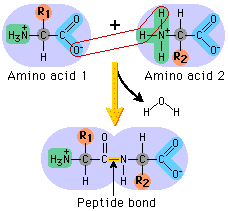 what type of bond joins the monomers in a protein’s primary structure?
peptide 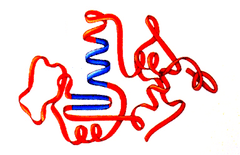 ______ structure is achieved when a protein folds into a compact, three dimensional shape stabilized by interactions between side-chain R groups of amino acids
tertiary 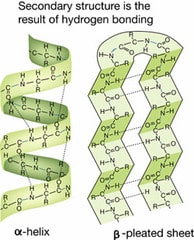 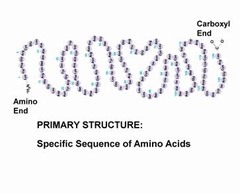 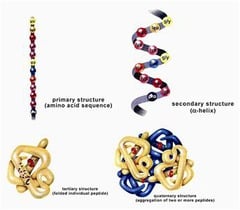 ___ structure is the result of two or more protein subunits assembling to form a larger, biologically active protein complex
quaternary 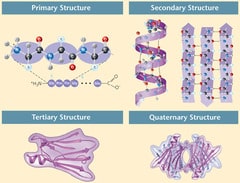 Sort the images according to the level of structure in the proteins shown.
Sort the items into the appropriate bin.
The tertiary and quaternary structures of proteins—how they fold into their overall three-dimensional shapes, and how different protein subunits come together to interact—both ultimately depend on the primary structure, the sequence of amino acids in the proteins. A different sequence of amino acids will lead to different secondary structures and a different shape of the overall protein.
How many different primary sequences can be generated by randomly assembling amino acids into peptides that are five residues long?
20^5=3,200,000
Correct. Given 20 major amino acids, there are 20 possibilities at each position resulting in 20×20×20×20×20=205 different primary sequences.
A major limitation of the ribbon model of a protein is:
-it gives a false sense of open space in the protein
Only the space filling model gives a true sense of how tightly packed the space inside the folded protein really is.
In Figure 3.2, green R-groups are nonpolar and pink R-groups are polar. Which statement best explains this difference in terms of the relative electronegativities of C, H, O, and N?

Which of the following is true of protein folding?
Some proteins can fold spontaneously.
Correct. This was shown in experiments with ribonuclease by Anfinsen in the 1950’s.
Where is the information that directs different polypeptides to fold into different shapes?
in the primary structure
What is an active site?
the position in an enzyme where substrates bind
Why are proteins not considered to be a good candidate for the first living molecule?
The cannot serve as a template for replication
Which of the following types of amino acids would you predict to be present in the DNA binding sites of these proteins?
basic amino acids
In a polypeptide, what bonds are responsible for the primary structure?
peptide bonds 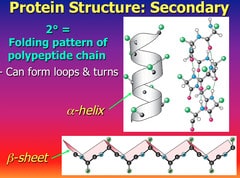 What features of protein folding and function are revealed by calmodulin and prions
More than one shape is possible for a protein and different shapes function differently or not at all.
Nonpolar amino acid residues are typically found in the interior of globular proteins like trypsin. Which chemical force is most directly responsible?
hydrophobic interactions
Proteins are polymers of
amino acids
are synthesized from monomers by dehydration reactions.
Polysaccharides, triacylglycerides, and proteins are similar in that they…?

Steroid Molecule
What is the structure shown in this picture?
20^12
How many different kinds of polypeptides, each composed of 12 amino acids, could be synthesized using the 20 common amino acids?
amino acids
Proteins are polymers of _____.
peptide
What type of bond joins the monomers in a protein’s primary structure?

Which of these illustrates the secondary structure of a protein?
hydrogen bonds
The secondary structure of a protein results from _____.
peptide bonds
Tertiary structure is NOT directly dependent on _____.
3′-TAAACG-5′
If a strand of DNA has the nitrogen base sequence 5′-ATTTGC-3′, what will be the sequence of the matching strand?
75
If a DNA double helix is 100 nucleotide pairs long and contains 25 adenine bases, how many guanine bases does it contain?
hydrogen bonds
The two strands of a DNA double helix are held together by _____ that form between pairs of nitrogenous bases.
phosphate group, a nitrogen-containing base, and a five-carbon sugar
A nucleotide is composed of a(n) _____. 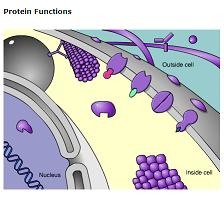 transport
This animation illustrates the functioning of a _____ protein.

receptor
Arrow D is indicating a _____ protein.
ovalbumin
Which of these does NOT contain a structural protein?
immune
Defensive proteins are manufactured by the _____ system.
either hydroxyl or carboxyl groups
Molecules with which functional groups may form polymers via dehydration reactions?
glycosidic linkage
Sucrose is formed when glucose is joined to fructose by a(n) _____.
none of them dissolves in water
The characteristic that all lipids have in common is that _____.
secondary
Which level of protein structure do the α-helix and the β-pleated sheet represent?