Which of the following will have the greatest ratio of surface area to volume?
A box that is 1×1×1
Which statement correctly describes the nuclear envelope of a eukaryotic cell?
The nuclear envelope is continuous with the endoplasmic reticulum.
Which organelle plays a role in intracellular digestion? 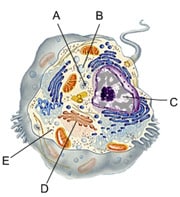 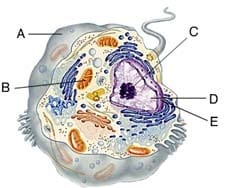 Which of these is the double membrane that encloses the nucleus?
E, the nuclear envelope
The _____ is composed of DNA and protein.
Chromatin
Ribosomal subunits are manufactured by the _____.
nucleolus
_____ are the sites of protein synthesis.
Ribosomes
Which of these manufactures cellular membranes by adding membrane proteins and phospholipids to its own membrane?
rough endoplasmic reticulum
The _____ is a selective barrier, regulating the passage of material into and out of the cell.
plasma membrane
Where is calcium stored?
smooth endoplasmic reticulum 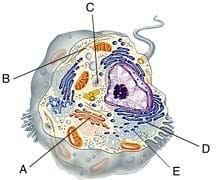 Which of these structures stores, modifies, and packages products?
A, the golgi apparatus
Which of these are hollow rods that shape and support the cell?
microtubules
_____ is/are identical in structure to centrioles.
basal bodies
Which of these organelles produces H2O2 as a by-product?
peroxisome 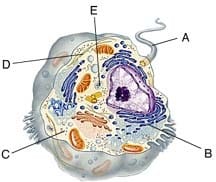 Which of these provides the cell with structural support?
Microfilaments
Drag the labels on the left onto the diagram of the animal cell to correctly identify the function performed by each cellular structure.
a. synthesis lipids
b. assembles ribosomes
c. defines cell shape
d. produces secretory proteins
e. modifies and sorts proteins
f. digests proteins
g. generated ATP
Comparing eukaryotic and prokaryotic cells. Drag each cell structure to the appropriate bin.
Prokaryotic Only: nucleioid
Eukaryotic Only: nucleolus, lysosome, mitochondria
Both: plasma membrane, ribosomes, flagella
In eukaryotic flagella, the fibers that slide past one another due to the activity of dynein proteins are ___.
microtubules
Many cell organelles, most notably the nucleus, are anchored by ________ which are assembled from a diverse class of proteins.
intermediate filaments
Centrosomes are sites where protein dimers assemble into ___.
microtubules
The extension of psuedopodia in amoeba is due to the regulated assembly and destruction of ___.
microfilaments
The only cytoskeletal fibers not associated with intracellular movement or whole cell locomotion are the ___.
intermediate filaments
During muscle contractions, myosin motor proteins move across tracks of ___.
microfilaments