this is a symbol for a
transformer
utility company power lines carry what kind of current?
alternating
when measuring resistance with an ohmmeter,
Disconnect power
in this schematic, the total resistance is
100ohms
electrical current flowing from one component to the next is an example of what kind of circuit?
open
When wire conductors are coated with solder, the process is called?
tinning
in order to make an electric current flow, it is necessary to have
an ammeter
a device that converts sound waves to electric current is a
transistor
Wires are joined together with solder to ensure
Maximum voltage
which of the following can NOT be used to store an electrical charge?
fuse
which of the following is a type of resistance in an AC transformer circuit?
impedance
the type of electricity used to power a car radio is typically
DC
the most commonly used fuel for running automobile engines are
gasoline
which of the following is NOT part of a car’s drive train?
transmission
Which engine component stores oil for lubrication?
oil pan
the catalytic converter is part of what system?
Emission control system
How many crankshafts are there in a V-8 automobile engine?
8
The engine flywheel bolts to the?
crankshaft
What kind of wrench should be used to tighten engine components such as a manifolds and cylinder heads?
torque
the function of the master cylinder is to
Apply hydraulic pressure to the wheel cylinders
which of the following part of a conventional distributor?
rotor
Coolant flow through an engine is regulated by the ..?
thermostat
Nails are usually driven into wood with
hammers
which of the following uses a penny system to specify its size?
finishing nail
Taps and dies are tools to?
Cut threads for nuts and bolts
which tool is used to bend large sections of sheet metal?
lathe
what is placed around a chimney to prevent leaks?
flashing 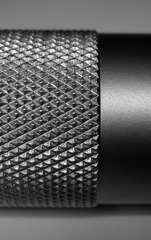 this type of pattern on metal is made by a process called
knurling
Self-tapping screws are primarily used when fastening objects to..?
sheet metal
Anchor bolts are used to hold the?
Rebar to the concrete
which of these does NOT make wood chips when it is used?
drill press
to properly turn wood stock, one should use a
lathe
the best saw for accurately cutting 3 inches off the length of a 2 x 8 x 18-inch piece of lumber is a
radial arm sawt
Gear A is the driving gear. If all the teeth are shoot off of Gear B, which gears will turn?
gears A and C
a series of 4 gears (W,X,Y,Z) is driven by pulley V and a belt. if V turns in the direction shown, which gears will rotate clockwise?
Y and X
a box sits on a smooth table. 3 strings are attached to the box, each having a weight of 10 Ibs. attached to the other end. the box will move in direction
D
4 weights are tied together and hung from the ceiling. what will be the tension in the cord at the point labeled X?
60 pounds
the illustration shows a water tank that is made of wood planks and reinforced metal hoops. why are the hoops closer together near the bottom of the tank?
the water pressure pushing against the sides of the tank is greater near the bottom
Spaces are placed between slabs of concrete in city sidewalks to?
allow for expansion and contraction
is it true that frictional forces…
only operate in vertical directions
This drive pulley always turn
Faster than pulley A or C but not pulley B
a belt passes over a drum and its ends are connected to springs. if the drum rotates in the direction shown and there is friction between the drum and the belt, then
spring 1 will get shorter, and spring 2 longer
a spring will compress 1 inch for every 50 pounds of force that is applied to it. how much force is needed to compress the same spring 10 inches?
500 Ibs
As part A moves to the left, gear C will turn
C. first in direction 1 and then in direction 2
a spring is compressed against a wall by a wooden block that has a force applied to it. if the force is removed from the block,
the block of wood will move to the right
the illustration shows an example of…
an inclined plane
what would you tell the person who is trying to loosen the rusty nut with the wrench?
move your hand farther from the nut